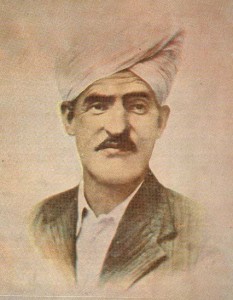 To Mahjoor, men are much more different than they are alike. The diversities among human beings, divergences in their tastes and interests are viewed with an amount of dissatisfaction by him:

“I have seen innumerable flowers of same hue and color, but no two men are ever the same.”

Mahjoor does not seem to be having faith in the innate goodness of human nature. For his dissatisfaction bordering on contempt, more than not, crystallizes itself in clear denunciation of ambition, selfishness and violence in human nature. The two following verses broadly reflects this:

“Selfishness and love have been inseparably fused together there will be none to seek detachment of the two.

“The man drinks the blood of his fellowmen, the concept of human feelings no longer exist.”

The degeneration or downfall of the ‘perfected self’ was regarded almost impossible by the poets of the sufi tradition as well as by the poets of the succeeding Romantic School, though to a lesser degree. What we find in Mahjoor is rather an acceptance of, and a belief in, the possible downfall and degeneration of men. Liberty and honesty, religiosity and sincerity, courage and goodwill, in his opinion, had been the leading ideals of the preceding generations. Contrary to this, a deep sense of disillusionment with the present age and generation is characteristically predominant in him as is openly expressed in the poem ‘kats zoon’ (the eclipsed moon). While registering his deep shock at men’s downfall, the poem also hints at an unfavourable political system around them. Mahjoor’s assertion on human degeneration, in my opinion, has its roots not so much in the perversity of human nature as in the injustices of the existing system.