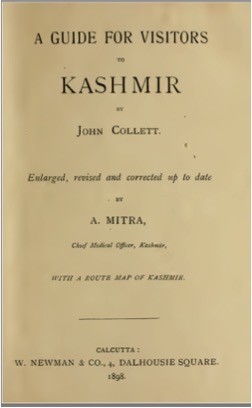 A guide for visitors to KASHMIR

The Maharajah’s coins in circulation in Kashmir are the old Kham rupee, equal to 8 annas of the Indian rupee, and the chilki – the latest issue of silver coins, and now only issued – equal to 10 annas of the Indian rupee; 8 pieces of copper make up one anna of the Maharajah’s coin, equal to 12 pies or 4 pice of the Indian anna. The Kham rupee, called the kohna or old coin, and the chilki, called the newi or new coin, are both marked with the letter J.H.S. Some sort of mystery seems to hang over the placing of these letters on the Kashmir coins, and which Englishmen take to be the Christian monogram; but, so far as the unauthenticated history of these coins is concerned, the reason for these letters on them may be found in the following story.

When Ranjit Singh was the ruler of Kashmir, there was a silver coin called Nanak Shah, after the founder of the Sikh religion, and the value of this coin was equal to 16 annas. This was found to be inconveniently large, mainly owing to the slender means of the people amongst whom it circulated. Accordingly the Kham rupee, of 8 annas only, was introduced; but before this was done, the Nanak Shah coin had been issued from the Mint, which then existed in Srinagar, of less intrinsic value than formerly, or than it ought to have been. When this was discovered, the Master of the Mint was held to be responsible, and as a punishment, both his ears were cut off.

After the annexation of the Punjab, between the years 1853 and 1859, when Sir john Lawrence was Chief Commissioner of the Punjab, in certain negotiations with the Maharajah of Kashmir, Sir John Lawrence made some objections to the silver coins in circulation in His Highness’ dominions. In order to conform to the Chief Commissioner’s wishes for some change, the three letters J.H.S. were stamped on the coins. The meaning of this monogram may be, therefore, the representation of the three words Jammu, Highness, Singh; or, more fully, His Highness (Golab) Singh. Sir John Lawrence was pleased with this, and His Highness was equally gratified, and thus, the wishes of two important persons were complied with.
The Indian rupee is commonly used in preference to the Maharajah’s coins. Government of India currency notes and bank cheques are easily cashed during the season.