Journalism in Kashmir, Part One 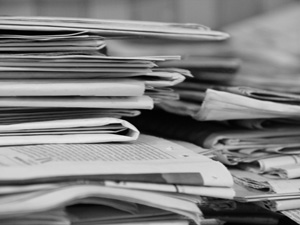 Journalism or better known as Media has come a long way today after the earliest known journalistic effort, Acta Diurna (Daily Events) of ancient Rome. Dating to 18th century when the Britain press came to be known as ‘Fourth Estate’, until now, journalists have continued to serve as watch dogs for the public and indubitably uphold the dignity of their profession.

In the State of Jammu & Kashmir, there was no permission for journalism during Maharaja’s or the Dogra rule. Mohammed din Fouq, who was a well-known Kashmiri historian based in Lahore used to publish his own newspaper Kashmiri Gazette. He, after witnessing the pain of his people, started to write about Kashmir and highlight its issues. This paved way for journalism or the  print media in the State.

According to various references , journalism got off to its start as back as in early 1930’s, when a popular Quit Kashmir Movement was launched by people against the Dogra rule, under the leadership of Sheikh Mohammed Abdullah. This movement gave people an impetus and they mentally prepared themselves to start the newspapers.

Since its inaugural in the valley, media never looked back. Today, we have a plethora of newspapers coming out only from Srinagar, which are  making  the required impact. However, this profession has come across different changes in the due course, but has still maintained its aura and impact.

Going back to the history of press in Kashmir, experts say that the roots were laid during  Maharaja’s time. During this period,  like the state of political movement or political consciousness, everything was unorganized. The same trend was reflected in the newspaper of that time. However, there was a huge scope for putting the aspirations and grievances of the people into a print format. Since Maharaja was an autocrat monarch, and problems of people were related to him, there was not much scope of writing against him.

The paper was given permission as it contained almost everything about king and his highness. People were not given any space. Historically, it is the first newspaper published from Kashmir,” says Mohammed Yousuf Taing, ex- secretary, Cultural Academy.

“In 1924, first newspaper of valley Ranbir was started by a Jammu based Hindu, namely Lala Mulk Raj Saraf. It was published in Urdu. The name Ranbir was because of the name of Maharaja Pratap Singh’s father Ranbir Singh.

This paper continued until 1928-29. Then development, in terms of consciousness took place among people and they started to question the set format.

Initially Kashmir had some Urdu newspapers like  Millat, Rehbar and Islah supporting the cause of freedom movement.

These papers became popular as they supported the cause of freedom struggle. In every issue, there were columns written on Kashmiri struggle, poems were written by Maulana Zafar Ali khan  to support the people’s movement. A news magazine, Muslim Outlook was also published from there.
Soon these newspapers created a buzz in the society. They were sold hand to hand by the people, but were banned soon after by the then Government.

Vitasta in 1932. It was a weekly newspaper which presented the facts and stories about Kashmir.

Meanwhile, Muslim Conference also started its own paper Sadaqat, edited by Mohammed Maqbool Bihaki. It was the voice of people as it gave space to the problems and atrocities faced by the common masses. Haqeeqat was yet another paper, which joined the race of newspapers until 1935.

In 1935, Prem Nath Bazaz in collaboration with Sheikh Mohammed Abdullah started a paper Hamdard. It started as a weekly newspaper and due to its popularity, became a daily publication.

“In 1944, when Mohammed Ali Jinnah came to Kashmir, he was very much impressed by the way Mr. Bazaz conducted his interview and presented his speech that he gave at Muslim Park, Jamia Masjid through his paper,” says Taing.

Meanwhile, Sheikh Mohammed Abdullah had changed Muslim Conference into National Conference, the newspapers published from Delhi and Jammu were taking a strong stance against him. Therefore, to present his works before people, he in a dire need of a voice called newspaper, started his own paper Khidmat, edited by Maulana Mohammed Syed Masoodi, who was also the general secretary to him.

“In 1946, after the Quit Kashmir Movement was launched by Sheikh Abdullah, Khidmat, the official publication of National conference was banned by the Government. Ram Chand Kak, the then prime minister of Kashmir along with Prem Nath Bazaz started writing and propagating against Sheikh,” says Taing.

Later, other new newspapers also came to the fore. They included Martand in Urdu, which was earlier edited by Prem Nath Kanna and later by Badrinath Matoo. The paper presented the aspirations of Kashmiri Pandits, Desh, edited by Pandit Kashab Bandu, Roshni and Khalid, edited by Sadri Din Mujahid.

Let Us Be True – A poem by Syed Rabe’a Bukhari