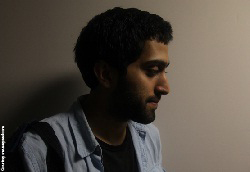 MUSA SYEED is an independent filmmaker and writer. His first narrative feature set in Kashmir, ‘Valley Of Saints, was premiered at the 2012 Sundance Film Festival, where it won the Audience Award for World Cinema: Dramatic and the Alfred P. Sloan Film Prize.
Musa has to his credit other works like ‘Bronx Princess’, And he is also a co-director of a documentary ‘The Calling’.
Syeed was an adjunct professor of documentary production at Williams College and a Fulbright Fellow in Cairo, Egypt, where he focused on experimental filmmaking. He is an alumnus of New York University’s Tisch School of the Arts and the Middle Eastern & Islamic Studies Department.

Some extracts from an interaction by Sarah Kabeer.

Tell us about your childhood.
M Syeed: Since I was a kid, I was interested in films. I would make small movies with my brother, and we would try to replicate the special effects we saw in big Hollywood films. But at the same time, we were getting more and more aware that the characters that looked like us on movie screens didn’t represent us. South Asian and Muslim characters in films never really felt authentic, and of course most of the time they were villains. So I think that awareness led me to consider film as not just something fun, but as a tool to bridge cultures, create conversations, and something to make a career out of.

For how long have you been staying outside Kashmir? Do you plan to come back, or work from there?
M Syeed: I was born in the United States. So technically, I have never been a resident of Kashmir. I visited once as a child, but it was nearly twenty years until I went again.

How did the thought of making ‘Valley of Saints’ hit you?
M Syeed: As I didn’t grow up in Kashmir, and didn’t really spend any time there, I was curious about my parents’ homeland. So, I thought of making a film that I thought would be the best way to reconnect with the place.

How was the response been of ‘Valley of Saints’?
M Syeed: The response has been overwhelmingly positive. I think for international audiences, the film has provided a rare glimpse into daily life in Kashmir. While there has been news coverage of the conflict, there hasn’t been much of anything about everyday Kashmiris and their culture, loves, hopes, desires, and relationships. And of course, the beauty of the place is a big draw. For Kashmiris who have seen the film, I think they also appreciate that their story is being told with more warmth, humor, hope, and dignity. Unfortunately, I haven’t shown the film in Kashmir yet, but I hope to do so this spring or summer.

How has been the journey so far?
M Syeed: The journey has been amazing. I never expected such an enthusiastic response from people all over the world. I’m grateful that I could be part of bringing the Kashmiri story to the international stage.

There is a new change in Kashmir, where people are coming up with their stories about Kashmir through writing, art, photography, and filmmaking. How do you see this trend?
M Syeed: It’s very encouraging to see young Kashmiris expressing themselves through art. The art contests, concerts, and film screenings that I have seen or heard about in Kashmir really show that a generation is coming of age, and they have confidence in their story and a need to tell it. I do hope to do some more projects there, not just films.

How do you see Kashmir in the future?
M Syeed: There is a lot of news from Kashmir that encourages me, and at the same time, a lot of news that breaks my heart. But I have trust in the wisdom and resilience of the Kashmiri people, particularly the youth, to bring about positive changes in the future.

Journalism in Kashmir, Part One