Another week of our respect for the Spirit of Women of Kashmiri origin, and their resolve to keep the wheel of humanity in motion. While the whole world is grabbling with the challenge of COVID19, the role of women, not just of Kashmiri origin, but of women as such becomes more crucial. We will continue with our effort to acknowledge their role…

Haseena: The Honey Maker of Kashmir 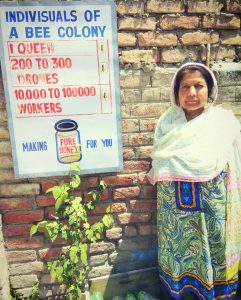 Not just an Apiarist, Haseena is a job creator, a home-maker, a trainer and a proud mother. At 50, she is in the business of pure honey and owns a brand ‘Oriental Apiary’. “I work from home,” she says. Her business is located on the banks of Dal lake in Naidyar area of Rainawari locality, Srinagar.

Nearly three decades back, she took over the responsibility of this bee farm from her father Ahmad Ali Khan. There was interest in her and she learned about bee farming from her father. Today, the family of three sisters depends on the production of honey.

With a work-force of six people, personally trained by her have been able to keep the product quality consistent. The outcome of her efforts in keeping the quality of honey consistent has got her some international customers also from Canada, Australia, USA, Japan, China and many more countries. The list of her international clientele consists of some interesting names like  Sir Michael Philip Jagger, lead vocalist and co-founder of “The Rolling Stone’; Tunji Banjo, a former professional footballer of Nigerian-Irish decent; Yash Chopra, late Bollywood producer and Karan Singh, the last Dogra heir of Kashmir.

“My sales approach is simple, have knowledge about the products, package them well and price them right,” she says. 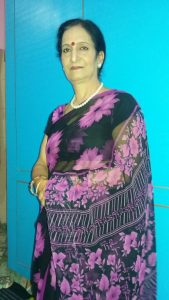 For her, acting is not just a passion, but a “life in itself and a mystery”. She has dedicated her whole life for this art despite facing many obstacles.

Kusum Dhar is a senior theatre and TV artist who started her career back in 1960s hails from Karanagar, Srinagar.

In 1960s, Kusum got exposure as a child artist in Radio Kashmir, Srinagar. By 1980s she was a known name on Srinagar Doordarshan also for her roles as a mother-in-law.

She was inspired towards acting by her mother. “I was easily drawn to anything creative especially acting. Being in a family of artists helps a lot. My mother used to work with Radio Kashmir. Her acting skills inspired me,” she said.

Kusum said that seeing her mother and so many talented people on television and in radio performing and putting their imagination and creativity to life inspired her to believe that she could also make it happen.

For Dhar, her presence in 1970s and 1980s on television in a conservative society was not easy.

“Initially, people wouldn’t support me. They used to pass comments on me when I would leave for work even in my locality. But my husband supported me,” she said.

Kusum remembers the days in Doordarshan, “I was given a role of an actress in a serial. But I told my seniors to give me a role of a mother. At the age of 20, I had played a role of an old mother-in-law,” she said.

She credits her success to her husband and mother, who she said have always helped her professionally and personally to grow as a professional artist.

Dhar has won several national and state-level awards and was also awarded the ‘Best achievement award for women’ by the Sahitya Akademi.

In 1990s, Dhar defied all stereotypes to become a prominent female artist from Kashmir. Been in the spotlight for quite sometime now, she is inspiring young artists in the Valley to get into acting, despite all odds.

She has also written a book titled ” Lalwin Dag” and “Aash”. “I have started writing poetry since 2002 and almost every good or bad memory in my life has a soundtrack.”

Shutdowns in Kashmir on some did have a very positive impact. Nadeyah found art beautiful and refreshing during the shutdowns. “I learned this art form of calligraphy during the shutdown. I used acrylic colours on my kitchen tiles,” she says.

Nadeyah stays faithful to the old tradition of Calligraphy while incorporating modern designs.

Hailing from Kralpora, Budgam,  she has kept the traditional art form alive, which was once the pride of downtown. “Some of the greatest artists of calligraphy were from downtown which was also the hub of arts and crafts. This art form was more practiced in earlier times. But as an artist I was very interested to spread this art form as much as I could. I wanted to be part of its revival in Kashmir,” she adds.

Not armed with any professional training, she found her way and says that this gives her spiritual peace and freshness.

Starting this art form by imitating the work of veteran calligraphers, she opted facebook and instagram to propagate it. Today she has gone commercial and has a clientele in Iran, Dubai and in different parts of India.

“There is something magical about this art form. Whenever I do it, I feel like I am communicating with the Supreme. This art-form takes me to a peaceful world. It also redefines our perceptions about the world,” she feels.

An alumini of  St. Mary’s  Presentation Convent , Jammu  Vinca who happened to be a Board Topper opted for medicine, as she always thought that being the medico was the best way to serve the humanity. Her paternal aunt was the greatest source of inspiration as she grew up observing the way her aunt was serving humanity, being a medical professional.  She feels being a medico makes you a more patient person and  gives you a closer exposure to life. She is practising at Colombia  Asia Hospital, Ghaziabad.

Her favorite past time is spending time with the family. She loves to converse with her children in Kashmiri and both her children are fond of  Kashmiri cuisine, be it Hakh or  Roganjosh. Festivals are celebrated in purely Kashmiri style as her family is too keen to create the atmosphere at home as was in Kashmir.

Although she herself never lived in Kashmir but has heard a lot of stories about co-existing of communities in Kashmir from her family. She is of a very strong view that the Kashmiri youth is the future of  Kashmir and they will not only have to preserve the culture but have to make sure that Kashmiriyat survives.