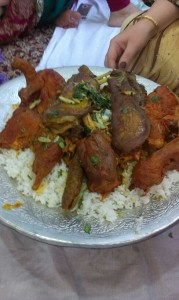 There are so many references in Rig-Veda and the Nilamat Puraná about Kashmiri’s being meat-eaters.  Much before the references which gives credit to invader from Central Asia in Kashmir of introducing the now very famous Cuisine of Kashmir ‘Wazwan’.

The closed to reference, to what we call “Wazwan” , is connected with the invasion of India by Timur in 1398, followed with the migration of craftsmen and cooks from Smarkand to the Valley of Kashmir.

Kashmir was the only place in the sub-continent where the Hindu population had meat in their cuisine, except beef.  With time, despite the spread of Islam in Kashmir, the meat in the diet of Kashmiri’s continued and beef was never made part of the Wazwan.

As a differentiator, the Muslims opted for goat in their cuisine as compared to lamb, which was part of the diet of the Hindus / Pandits.

The advantage ‘Wazwan’ has over other cuisines from other part of the world is quite unique – first is a combination of various dishes and the traditionally the spices used are boiled and not fried, giving the dishes in a ‘Wazwan’ a distinctive flavoring and aroma.

The traditional number of course (dishes) in a traditional wazwan consists of twenty dishes. Though, less number (around 15) of dishes too can form a Wazwan. Seven dishes are a must, which include – tabakh maaz or Qabargaah, rista, rogan josh, korma (lamb or chicken based), aab gosh, Maithi maaz and Gushtab.

For that common pain…