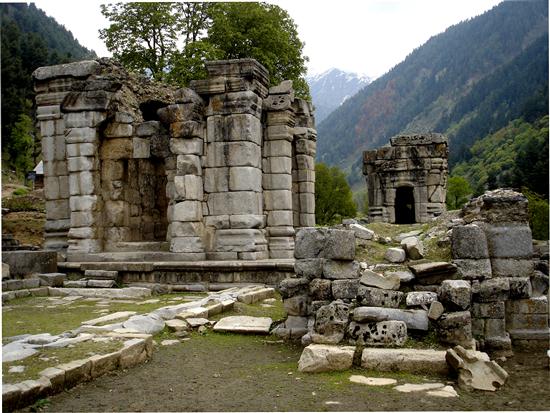 Kashmir’s contribution to the Buddhist ideology and culture was first in chronological order. Ashoka sent Madyantika, a preacher to Kashmir to propgate the new faith. He founded 12 Viharas. According to Hieun Tsag, 500 monks had come to Kashmir during the time of Ashoka. The great Buddhist Counsel was held in Kashmir, in Kundala-Vana-Vihara, in Kanishka’s time, in the first century A.D. (78 to 102 A.D.). Ashvaghosha is said to have been brought by Kanaashka from Patliputra to Kashmir to function as the Vice-chief of the Counsel. The ‘Greater Vehicle of the Law’ was drawn up here by the Buddhist theologians. The reputed Kashmiri author, Naga Sena wrtoe an important Buddhist work, “Milinda-Panha’ – a conversation between Theravandan and the Bacterian King of North India.

Numerous Kashmiri Buddhist scholars have written original works in Sanskrit and Prakrit, and even translated these into Chinese. In 4th centure A.D. Kumarajiva went to Kucha and from there to China. Some Kashmiri Scholars who contributed to Buddhism are Buddayasha, Dharamayasha, Gnavarman, Dharmarkasha, Saghabhatta, Gautama Sanghadeva, Jinamitra, Dhanashila and Ananda. Scholars from China to Kashmir are Cheyan, CheMong, Fa-Yong and Hiuen Tsang.

Kashmir had also played an important role in the development of Indian literature. It is the homeland of Alankara Shastra (Rhetoric). Vamana (750-800 A.D.) is the founder of Riti school. Udbhratta (774-813 A.D.) was the teacher of the theory of three Vittis. Rudhratta (800-900 A.D.) expounded the theory of figures. Ananda Verdhana (850-900 A.D.) is the founder of the school of Doctrine of Dhvani (suggestions). Mammota (about 1100 A.D.) was the upholder of the theory of Rasa (sentiments). Abhinava Gupta was the expounder of the theory of Rasa Dhavani, and the Pratyabhijna Shastra and Mahema Bhatta, Kayyatha and Ruyyaka (11th Century) were the renowned rhetoricians. The historical works of Bilhana, Kalhana, Jonaraja, Shrivara. Prajyabatha and Shuka are remarkable. Kalidas is said to have been a native of kashmir (refer Prof Lacchmi Dhar’s work – The birth place of Kalidass). Patanjali, Pingala are also said to be Kashmiris. So also, Charaka (who wrote Chaka Samhita) and other poets like Pravasena, prolific writer like Kshemendra, Ratnaka, Shivaswami. Abinanda Mankha, Somadeva, other were Kashmiris. Kashyapa Muni is said to have written a treastise on agriculture and Lilavati made name in mathematics.