On a perfectly open and even plain, gently sloping away from a background of snowy mountains, looking directly out on the entire length both of the smiling Kashmir valley and of the snowy ranges which bound it – so situated, in fact, as to be encircled by, yet not overwhelmed by, snowy mountains – stand the ruins of a temple second only to the Egyptians in massiveness and strength, and to the Greek in elegance and grace. It is built of immense rectilinear blocks of limestone, betokening strength and durability. Its outline and its details are bold, simple, and impressive. And any over-weighing sense of massiveness is relieved by the elegance of the surrounding colonnade of graceful Greek-like pillars. It is but a ruin now, but yet, with the other ruins so numerous in the valley, and so similar in their main characteristics, it denotes the former presence in Kashmir of a people worthy of study. No one without an eye for natural beauty would have chosen that special site for the construction of a temple, and no one with an inclination to the ephemeral and transient would have built it on so massive and enduring a scale. We cannot, for instance, imagine present-day Kashmiris building anything so noble, so simple, so true, and so enduring. And the people who built the ancient temples of Kashmir must have been religious, for the remains are all of temples or of sacred emblems, and not of palaces, commercial offices, or hotels; and they must have held, a least, one large idea or they would not have built on sp enduring a scale. They must have been men of strong and simple tastes, averse to the paltry and the florid. What was their history? Were they a purely iindigenous race? Were they foreigners and conquerors settled in the land, or were they a native race, much influenced from outside, and with sufficient pliability to assimilate that influence and turn it to profitable use for their own ends?

Fortunately on of their native historians has left us a record, and Dr. Stein’s skill and industry in translating and annotating this record makes it possible to obtain a fairly clear idea of ancient Kashmir. From this and from the style of the ruins themselves, we gather that the main impulses came from outside rather than from within – from India and Greece. And perhaps, if in place of their mountians, which tend to seclusion and cut a people off from the full effects of that important factor in the development of a race, easy intercourse and strenuous rivalry with other people, the Kashmirians had, like the Greeks, been in contact with the sea, with ready access to peoples and other civilisations, they might have made a greater mark in the world’s history. But they had this advantage, that the beauty of their country must always, as now, in itself have been an attraction to outsiders, and so from the very commencement of its authentic history we find strong outside influences at work in the country. 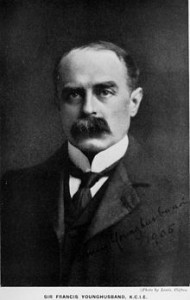