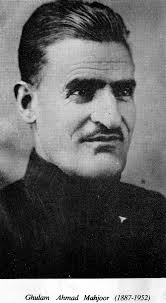 Her Mahjoor’s main contribution lies in his deliberate avoidance of mystic fancies. The Absolute Powerful Lord or Sufis is regarded as a Supreme Kind Master, generous benevolent, and kind to his creation;

Who else you will pay heed my love to my weal and woes.

He is impersonalized in a manner daringly different and is addressed as ‘Poshimut’ (Love of flowers); ‘Lalla’ (the dear one); (love of love) instead of traditional ‘Day’ (absolute Supreme)

The concept of ‘Divine omnipresence’ is vigorously asserted by Mahjoor. He does not find God in distant heavens or lonely solitude, away from world of life. The universe in all its varying shades of beauty, nature and color is seen as an expression and manifestation of his grace.

Mahjoor feels your presence in deep habitats, likewise, the dense forests are but expressions of your grace.

His attempt to communize the concept of ‘Divine omnipresence the verse:

In a dense forest near a honey suckle, I well wait for you my Lord. For that forest is no less sacred to me, than was ‘Tour to Moses. Don’t be far from me any more.

Mahjoor is highly reminiscent of Wordsworthian style of every common bush being a-fire with God. The common good of man which mystic philosophy termed as ‘Irfaniyat’ (blessedness) consists in the realization of the universe around him. Love is another concomitant of that blessedness. God’s love cannot be sought without love for his creation. The former in incomplete with the later. Thus concepts of Divine love and Human love are not only closely interrelated and interlinked but are rather inseparably fused together as is manifest from the following poetry:

I asked my God to accept my heart, He refused, saying it is devoid of love.

I will search for my Lord with heartful of love; For seeking his grace, I don’t require any beads, chants or rituals.