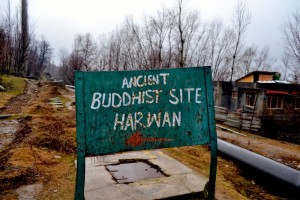 According to the Buddhist traditions, Kanishka, the Kushan Emperor, held his Buddhist Council in Kashmir.  He was advised by Parsva (Parsvika) to summon all the monks for collection of sacred texts, and to  prepare commentaries of the Sutras, the Vinaya and the Abhidharma. This council was held at Kundalwan in Kashmir. It has been termed as Kienthelo in the Chinese geography. Besides the large audience, this council was attended to by 500 Arhat 500 Buddhisattvas and 500 Pandits.

Asvagosa, the celebrated author Buddhacarita, the Saundrananda and the Sariputra-Prakarana, attended this council. It goes to the credit of this council that commentaries on all the Buddhist texts were compiled into two treatises known as Upadesa Sastras and Vibhasa Sastras. The latter is known as Kasmirshi in Chinese. It also goes to the credit of this council that for the first time in the history of Buddhism, freedom of thought and expression was recognized and it was declared that  texts of all the 18 schools of thought in Buddhism were correct; for all of them contained the word of the Master. This council is important in this respect also, because it marks a new epoch in the history of Buddhism. These doctrines penetrated into Kabul, Kandhar, Central Asia and Tibet. Kanishka, patronized such activities and even made a gift of Kashmir to the Sangha.

It is further been given by the Chinese sources that the final decisions of the Council were engraved on copper plates and deposited in a Stupa, under orders of the King. Excavations done at Harwan, Ushkur and Ahan have revealed existence of Buddhist relics but no traces of these copper plates have been found and this probem still engages attention of scholars throught out the world.

The three Pitakas, which ran into 300,000 verses, were engraved on Copper plates and deposited in a Vihara specially constructed for this purpose. It is necessary to quote the relevant paragraph from the detailed description as given by Hiuen Tsiang and it reads as under:

“Kanishka-raja forth with ordered these discourses to be engraved on sheets of red copper. He enclosed them in a stone receptacle, and having sealed this, he raised over it a Stupa with the scriptures in the middle. He commanded the Yakshas to defend the approaches to the kingdom, so as not to permit the other sects to get these Sastras and take them away with the view that those dwelling in the country might enjoy the fruits of their labour.”

The  historical value of this very important information provided by Hiuen Tsiang has been challenged. It is also suspected that it is only a pious fabrication of the famous Chinse traveler who came to Kashmir in 7th Century. There may be two reasons for this conclusion. One may be that Kalhana makes no mention of the Buddhist Council, what-so-ever. Secondly, a third century manuscript by Paramartha on the life of Vasubandhu makes no mention of the council convened by Kanishka at Kundalwan in Kashmir.