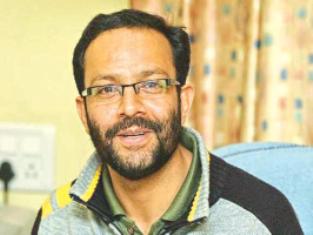 I always feel uncomfortable and a lot edgy whenever I find myself scratching the groves of my mind, probing across the jumbled web of memories recalling the moments I have had spend with those who have moved on, unexpectedly. Those who within a very short time were able to sneak into some corner of my memory and succeeded brilliantly in housing themselves there, forever.

There have been many in my life, who from time to time have become close to me, but still very few have been able to house themselves somewhere in my mind, becoming part of my being, permanently.

Making me recall the small and simple things – which at times make me smile and at time creates an opaque screen between me and the rest of the world, but never ever, even for a moment taking shape of a drop and rolling down my cheeks. Men do not cry, it is said, at least in open.

Izhar was one such person, who was able to scratch a permanent track within the grooves of my memory. Izhar, whom I met during the first introductory class of Mass Communication at the University of Kashmir in 1989, struck the cord in the initial week; the friendship developed over a period of time. He was one of the few I did not grow up with, but met during the last formal stretch of my academic life. We became close and I did not even realize when he started calling me by my nickname, which was a prerogative of very few.

Two years at the University were good enough to understand each other well. During those two years, he was always there, supporting my un-academic escapades and batting for me in and outside the class and his statements full of wit. I have never been able to understand, how even in the critical of times, he had a smile and the statement that eased the atmosphere of tension.

The next level of relationship happened once we moved out of the environs of the University into the real professional world. Ours was the breed of those journalists who were thrown right into the developing situation in Kashmir. Izhar joined us at the initial stages of launching probably the first English magazine, ‘Global Topics’ in the State.This was the beginning of the late nights, story ideas, his hearty jokes While I am jotting down these lines, the times we spend together is flashing across my mind, as if it was just yesterday- Lazy days with samosas’ and endless cups of tea, sitting inside the University Library, doing nothing, and having long discussion regarding our rights during our training at Delhi. The humble acknowledgment the day he decided to join us at ‘Global Topics’ and the day he started working for AFP.

There is so much to talk about, so many anecdotes to share, but emotions are running too high, and I don’t know where to start and what to share. At such times, the best course of action is ‘leave it for the some other emotionally calmer time’.

Last time in flesh we met was a time ago. But we used to talk often on phone. He knew his state of health, but never gave up hope. Each time we spoke, his statement was constant, always, “How are you doing? With the grace of God, I am fine now and doing well. Insha-Allah next time, I will meet you.”

In this lifetime, that next time never came. Maybe, he had planned it so. Maybe he wanted to roam across my memories as Izhar I knew from the earlier times.