After forty minutes of climbing and just a hundred metres short of the ridgeline, they arrived at a small gully. A thin trickle of water, from the accumulated snow further up the mountain dropped hesitatingly in a mini waterfall, to make a small pool next to a circle of boulders. A three by three metre hold dug between the boulders, covered with a tin roof and camouflaged with dirt and shrubs, served as a hideout.

A small hole next to the rocks, with a few steps, led into the dump interior. A dull wicker lamp placed in a niche, cast grotesque shadows around a room high enough for a midget. A normal man had to practically bend his back to move around.

The floor was covered with dry grass; the mattresses and quilts had been rolled and neatly tucked in one corner, while rations in tins and othes assortment of utensils, occupied the opposite corner. The floor was wet in places where water had been dripping from the roof and the place smelt of unwashed clothes, sweat and damp earth. It was hard place to live and had to be, for it was designed for hard, desperate men, and served as a winter hideout… 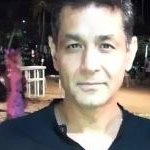 Abhay Narayan Sapru : graduated from Delhi University and subsequently joined the prestigious Indian Military Academy. Commissioned in 1988, he volunteered for the elite Special Forces. During his decade long stint with the Indian Army, he served extensively in almost all the insurgency ridden areas in the subcontinent – Sri Lanka, Kashmir and the north-east of India. He is recipient of the Sena Medal awarded for gallantry in operations in Sri Lanka, and of the Army Chief’s Commendation Card.
He is now settled in Gurgaon and work in the private sector. Besides writing, he has a keen interest in distance running, trekking and sketching. This is his first book.
36
Share FacebookTwitterWhatsAppLinkedinEmail