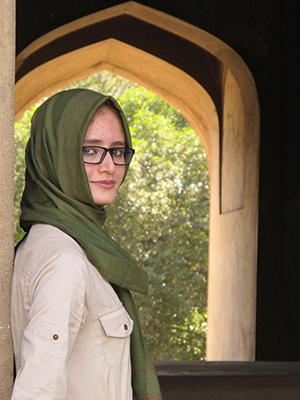 They are a diverse bunch of Kashmiris who like to challenge and defy the laws laid down by the generations gone by. What sets them apart is that they are some of the very few, who strongly believe in treading a new path, and who desire to leave their footprints behind for the generations to follow.

Their DNA is different – they have done what just a few years back was unthinkable for any Kashmiri woman.

Along the way, they have carved a niche for themselves or are well on their way to doing so.

These virtuosos with pens share some moments of their journey with TheCherryTree.in

Souzeina S Mushtaq started writing when she was 15. It was an emotional decision driven by an urge to speak for her people. Inspired by a woman journalist and a human rights activist, who was killed in a land mine blast, Souzeina decided to follow her steps and write, unlike what others had decided for her. Currently, she is working in New Delhi with Hardnews magazine.

She shares how her family went against her after she disclosed her decision. “They were angry and wanted me to retract, and opt for the “typical women-oriented courses”. Their pressures only motivated me more to follow my passion,” she says.

Journalism, Souzeina says, has helped her overcome her limitations. “It has helped me to broaden my vision and empathize with people and their causes.”

Aarti Dhar is the senior Assistant Editor of the national daily The Hindu. Starting her career in journalism with The Statesman in 1988, Aarti has covered almost everything, including HIV/AIDS and reproductive and child health-related issues in particular – extensively for the last eight years.

She holds a Masters’s Degree in Public Administration and is pursuing a Post Graduate Diploma Course in Bioethics from the National Institute of Epidemiology. Her story on the lives of widows and abandoned women living in Vrindavan, Uttar Pradesh was taken cognizance of by the National Legal Services Authority to provide facilities to them.

She was the first journalist of Kashmiri origin to cover the crime beat in Delhi. And it made her “efficient and decisive.” She says it is a challenge to keep the Kashmiri culture alive, owing to the “influences by various other cultures and inter-caste marriages.”

Family countered Bismah when she decided to move to Delhi to study journalism. Coming from a family where two of her uncles come from the same fraternity, Bismah too wanted to be a part of the media. “My family history too had a major impact on the choice of my profession,” she says.

After finishing her graduation, Bismah moved back to Kashmir and started working for one of the oldest newspapers in the valley, the Kashmir Times. After two years of working in a local daily, the “big break” came when she was selected to work with The Tribune.

Bismah stresses the importance of making contacts in journalism. “Every person you meet may have a story that might make news, and it is eventually a Journalist who decides what makes news,” she says. According to her, being from Kashmir is an added advantage “because you never run out of stories in this part of the world.”

She believes Kashmiris are capable enough of proving themselves in any sector. “We just need to take the firm resolve,” she says.

Esha had a flair for writing since childhood. “It is in my genes and the credit goes to my maternal grandfather,” she says.

Covering films events and one on ones, she says the best part is when biggies in the film fraternity acknowledge her presence. “I would be lying if I say, interacting with a celebrity or posing with him/her has no effect on me. Of course, I get to meet and interview people others just die to catch a glimpse of,” she says.

Being a Kashmiri Pandit, Esha says it was amusing for her when people would refer to Jammu and Kashmir as one district. “Now, the scenario has changed. People look at the state with a different perceptive though, they are aware of the problems in the state,” she says.

She deems her experience interesting. “I have always received respect from my male counterparts in whichever publication I have been associated with,” she says.

An admirer of  Late Sunanda Pushkar, she suggests that one should live life to the fullest.

Nothing could have been as delightful for Rubina as not being able to get admission to a Medical college. “I was free to pursue what I wanted, and that was to be a professional in the Mass Media,” she says. Rubina is currently based out of Gurgoan.

For her, her Kashmiri origin is an advantage. “People smile; they remember their trip to Kashmir with warmth and lovely memories,” she says. Her journey in journalism has been full of ups and downs as she had to take long breaks to look after her young children. “There were times when I actually had to start right from the bottom and climb the ladder all over. But, the satisfaction you get when your profession is your passion is great,” she says.

She advises young and aspiring journalists to work with passion. “Media is not glamorous. It is tougher than you think. Identify your strengths and your interests,” she says.