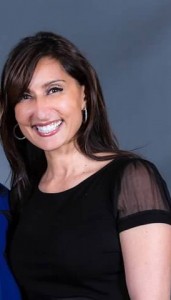 With her roots in Haba Kadal, Sringar, where her parents grew up, she was born in Hardwar, Uttar Pradesh. In her 40s she is the only Kashmiri who has been called as the most powerful woman in California. Shefali is a member of the Democratic National Committee’s National Finance Committee, a Co-Chair for the DNC Women’s Leadership Forum, a Presidential Appointee (President Barack Obama) to the United States Holocaust Memorial Council, Senior Advisor for South Asian American Digital Archive (SAADA), the list is long.

Excerpts from an email communication with Rajesh Prothi

When did you move to the US and what challenges did you face in the initial days?
We moved to the United States (Pittsburgh PA) way back in 1973, when I was jut two years ago old.  We only lived there for three years before shifting Cincinnati OH.  Since I was very young, I don’t recall much, although I do have a memory of my parents telling me how racist the area of town we lived in was, at that intersection of time.  I vividly recall the neighbor kids luring me into one of their backyards, one child holding one arm, another child holding another arm, and a third child punching me in the stomach.  I was only about four years old, at the time.  I also recall my parents telling me, later (after we moved from that home), that my brother was often targeted and beaten up, and our car tires were often slashed.  I am confident that the area is much more multi-cultural and accepting now.  Other than that, I don’t recall any particular challenges, as I was just a kid.  I believe that my mother and brother did experience additional difficulties when we moved here. 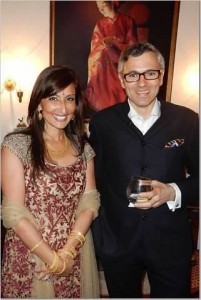 It has been a practice with Kashmiri families to encourage their children to opt for engineering or medical subjects. How come you opted for communications?
Yes, it is true that Kashmiri (and, all Indians) were somewhat guided into the engineering, finance and medical fields.  I always had a passion for politics, since the early age of nine.  My father used to talk about the miracle of this country, and how it was a true meritocracy.  Particularly, the 1980 Presidential election, effectively, boiled down to a peanut father (then President) running against an actor (then Governor) to be the leader of the free world.  My father would say that in no other country in the world would that likely be possible.  I was intrigued with politics.  My mother was, of course very concerned with my political interest, as she was a very practical type of personality (worried about my future finances, etc.).  Although, I was determined to get more educated within my field of interest.  I am someone who pursues my interest, and the practicality of it was something I didn’t very much consider.  I genuinely believe that we excel at what we love.  I did, often get dismissed by many folks in our culture when I was starting within politics, although outside opinions, were, and still continue to be, fairly irrelevant to me.

Traditional Kashmiris have never been very aggressive in business, more so, Kashmiri women. How did you manage to evolve your skills for fundraising?
I am not quite sure how a “traditional Kashmiri” would be identified, although I know that my personal life and journey was not very traditional.  My parents married, had one son (whom was aggressively taken away from them), had two other children, moved across the world, divorced a few years later, then my mother worked two minimum wage jobs to support herself and me.  My brother and I did not come from a financially secured background Thus, my elder brother and I were very scrappy, from a very young age, to learn how to pursue our dreams, God’s grace and very little support from others.  My mother did what she could, which was to keep a roof over my head and food on the table, beyond that,it was up to me.  In fact, my mother and I shared a one-bedroom apartment right after she got divorced, two beds in one room with one closet.  Thus, there was nothing very “traditional” in my life.  And, thus, I was not trapped in any sort of stereotype of expectation.  I knew that I was on my own, and I pursued my dreams, with God’s grace, fearlessly.  I had nothing to lose – literally nothing.  And, since no matter what I did, our community would judge my mother and me.  I also learnt at a very young age to not care, one single bit, what anyone thought of me.  If my heart and intentions are pure, then God’s protection and love was (and, is) with me. 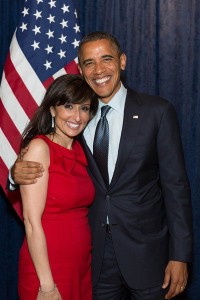 What have been your high points on both the personal & professional fronts?
My high points in my personal life are the births of both of my children.  They saved my soul and have made every cell in my body very fulfilled.  My high points within politics would be to get very engaged within the Obama candidacies and elections.  I am looking forward to being very active in Secretary Hillary Clinton’s presidential aspiration.

Do you idolize any women of Kashmiri origin or anyone else who has been your aspiration and contributed towards what you are today?
My mother, with absolute certainty has been my aspiration.  She has been through so much, and she has been exceptionally dignified and internally centered, as well as extremely mentally strong, every step of her adult life.  I have learnt how to remain gracious, especially in the face of inequity, due to her example.

What interests you apart from your professional career?
Without any doubt, I would say human rights activism.

Have you ever been to Kashmir?
Yes, we used to visit Kashmir often, when I was a child, as my entire maternal side of the family had remained in Srinagar until the early 1990s.

How proficient are you in your mother tongue Kashmiri?
I understand Kashmiri 100%, although do not speak it.  Growing up, my parents only spoke Kashmiri at home (not English or Hindi).

What is your message for the Kashmiris, especially the women of Kashmir?
To have faith in yourself; to pursue your passion fearlessly; to not worry one single bit, what others think of you; and, most importantly, to have deep and unwavering faith in God and His goodness. 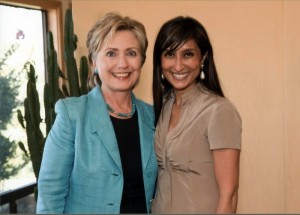 you make to keep the Kashmiri culture alive around yourself in US at your home?
I do remain active within  the Kashmiri culture in the bay area, as well stay in close contact with my family in India.  I discuss Kashmir often with my children, and how they are partially from this great culture.

Any anecdote that you would like to share with us that connects you with Kashmir?
I have already told my daughter that she will be getting the Deshahore piercing in a few years time.  She is both elated and terrified of this piercing, although I want for her to be very aware of her culture.  She is only half Kashmiri, thus, it is very important to me that she, and others, have a visual of her blood line.