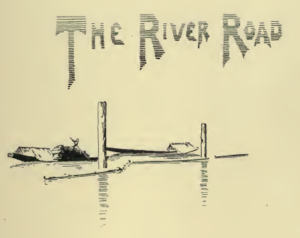 There are other roads in Kashmir; roads like colonnades between serried ranks of poplar trees, the tall, slim, silvery pillars of the beautiful popular alba, or the somber stateliness of the dark poplars of Lombardy; roads bordered by willows, or leading through marshy meadow-land, or carpeted with snowy petals from the blossoming branches of apple and pear and cherry trees, which make fragrant archways overhead; many and lovely are the roads of the Valley; but the road par excellence of Kashmir is the River, the Veth as the Kashmiris call it, which is an abbreviation of Vistasta, its Sanskrit name, the fabulous Hydaspes of the classic historians.

Up and down the wide and placid river go the flat-bottomed, slow moving boats of the country – the wide grain-barges, the doongas with their roofs and side of matting, the deep-laden market boats, and the little fishing-boats so often drawn up near the bank with a wide net outspread, its wet meshes glittering in the sunshine like a dragon-fly’s wing.

It is long since on the banks of the great river fair cities rose, enriched with the spoil of conquered countries; for it is long since the inhabitants of the Valley have had kings of their won race. So long ago is it, and centuries of such dire oppression have intervened, that the glories of their kings and the grandeur of their cities are forgotten; and the peasants who tell you fabulous tales of the piles of ruin near their villages, or regard with an almost contemptuous pity your interest in some old temple, seem not to realize that these are memorials of the ancient splendors of their own race.

The traces of the rule of these bygone kings have all but vanished, but the beauty and majesty of nature still remain, and make it easy to believe that the Valley was the cradle of demi-gods and heroes, one of the homes of the ancient Aryan conquerors of India, and the seat of a civilization so ancient as to make the great Rameses seem comparatively modern, and but a tale of yesterday.

Along the banks of the river, from the ‘City of the Sun,’ Srinagar, one may still trace the ruins of ancient cities and temples, to where, near its source, once rose the most splendid shrine of all – Martand, the Temple of the Sun.

On the way up the river from Srinagar the first of these is the temple of Pandrinthan. Going by boat, one anchors just beyond a fine chinar-tree, and below a bank fringed with willows. After landing, the Srinagar road is crossed, which here, and scarcely anywhere else, for a few paces, runs almost parallel with the river. Beyind the road lies a stretch of turf, then a grove of willows, under which the clover grows thick and green, while frequent little pools of water make of it almost a march.

Picking a devious way through the pools among the willows, one comes to some fine and stately chinar-trees on the edge of a little tank; and there, in the middle of the tank, is the temple of Pandrinthan.

It is, perhaps, a morning in early May, clear and brilliant, after a stormy night. The air is keen and pure; a glittering circle of lofty snow-peaks enclose on on all sides but the north, rising into a azure sky; the shodows on the Takht-i-Suleiman, the small, cone shaped hill between this and the city are of the warmest purple; and the rocky slopes of the hill at the foot of which lies Pandrinthan tower above one in bold outlines, un-blurred by any tracery of trees, bare to the wind and sun.

And down in the tree-shaded hollow stands the little hoary temple – sole relic of a former splendid capital of Kashmir. Very tired it looks, the little temple, cowering down into the protecting water, which twice at least in its history has saved it form destruction and the wrath of man. For when the old capital, the first Srinagar, which stood here and not on the present site of the city, was destroyed by fire in the reign of Abhimanyu, about the middle of the tenth century A.D., this temple was the only building that escaped; and again, five hundred years later, when the idol-breaker Sikandar was king, this was the only one of the temples of Kashmir which escaped his violence, “in consequence.” Sayd Ferishta, the scribe of Akbar, “of its foundation being below the sureface of the neighbouring water.”

But the burden of its thousand years weighs heavy on its crouches beneath them in hopeless sadness, deserted and alone. All round it youth and the joy of living riot in the fine air and sunshine, in the soft spring greens of the young willows, in the tall chinars, the embodiment of vigorous life, glorying in the splendor of their new foliage. Surely the Moghul noble who planted these trees by the shrine of an alien faith must have been promoted to it by an instinct of pity for the little lonely temple.