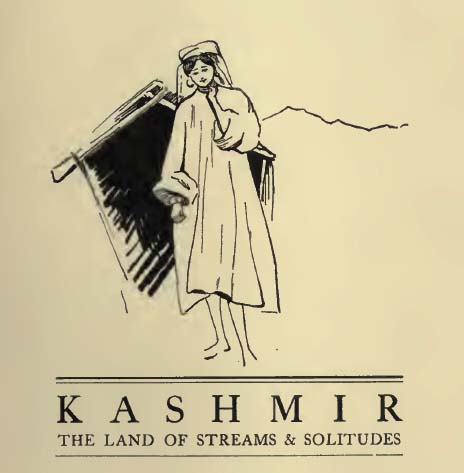 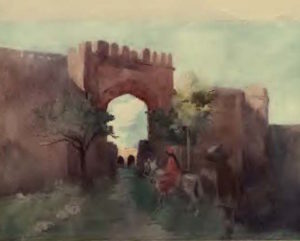 The date of the founding of the city, which once rose here, is lost in the mist of antiquity. No doubt the great Ashoka, Buddha’s famous disciple, was known in its streets, and meditated on Nirvana within sight of the serene beauty of the encircling chain of snows. Here, probably, lived his son, who built the first temple, a Buddhist shrine, on the top of the Takht-i-Suleiman, about 200 B.C., which makes it still one of the sacred places of the followers of that faith, and visited even by wandering Lamas from Tibet. But the beauty and wiles of serpent-goddesses lured him from his faith, and he fell back to the ancient rites of the worship of the Nagas, the snake-gods, while his temple has long sine been destroyed and replaced by others.

The victories of the great Laltaditya, who reigned from 697-738 A.D., no doubt filled its streets with rejoicing and decked its houses with spoils of India and Central Asia, though the new Srinagar had already for more than a hundred years been the capital.

The camps of the army of later king, the conqueror and gambler, Shankara-Varman, who reigned about end of the ninth century, his “900,000 foot, 300 elephants, 100,000 horses” must have made of the whole neighbourhood a resplendent Champs de Mars.

Now no ghost of fluttering pennon or shining lance disturbs the peace of the valley. The silent hillside is strewn instead with broken fragments of fluted pillars and blocks of carved stone, with here and there a mound of shapeless ruin where once perhaps a palace stood. A little way up the hill is a huge stone fragment, said to be part of a colossal statue of Buddha that once towered here above the busy city. Round the grey stone feet, worn and defaced with the lapse of centuries, waves now a field of scarlet poppies, gay and debonair, heedless that their vivid beauty lasts but for a day. 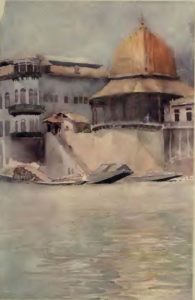 The temple itself is small, only eighteen feet square, and made of great blocks of limestone. The roof is pyramidal and seems to have been jarred by an earthquake shock, for though still keeping the general outline, the blocks of stone have gaps, between them and are tilted out of their proper positions. The inside of the roof is said to be covered with sculpture classical in design, but as the temple stands in water at least four feet deep one must have a boat to see this. Its founder, Meru, the prime minister of King Partha, in the early part of the tenth century, dedicated it to Mahadeo; but the tank probably had some connection with the old religion of the country, the worship of the Nagas, a survival of the gloomy earth-worship still near to the hearts of the primitive hill-men, the cult of the divinities who inhabit mountain and stream, the senders of storms and floods, mysterious power against whom men in these wild regions wage so unequal a strife.

This little temple never saw the best and most prosperous days of the city, for the seat of government had been moved to the new Srinagar 500 years before its founding. The decay of former greatness, ruin and disaster, fire and sword, these were all that its sculptured stones and cunningly wrought pillars ere fated to see. It had stood but fifty years when a great fire destroyed the city around it. Already the supremacy of Hinduism was doomed, and the ancient and splendid Hindu kingdom of Kashmir was tottering to its ruin. Civil wars and fainéant kings hastened the end, till the last of the

Hindu sovereigns fled before a Tartar invader early in the fourteenth century. It was left for a woman, a Hindu princess, Kuta Rani, a soldier’s daughter, to raise an army and drive out the invader. But she stabbed herself to escape an unwelcome marriage, and with her ended the Hindu rule in Kashmir unitl, in 1819, the victorious generals of Ranjit Singh entered the Valley. In the intervening five hundred years, Mahomedan dynasties ruled Kashmir either direcetly or through viceroys, and the faith of Islam become the prevailing religion.

But through all the changes that have swept the Valley and left their mark along the river-road in mosque and shrine, in stately garden or poplar avenue, none has ever rebuilt the old town, and the little temple still stands forlorn, emblem of age and desolation.