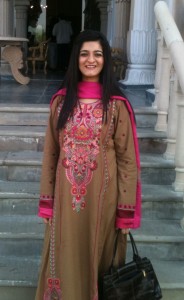 In 2013, she became the first Woman to be announced as a ‘Cluster Head’ not only for the HDFC Bank (where she works) , but in the entire State of Jammu & Kashmir. A student of Presentation Convent, Srinagar till 8th standard, Ayesha did her 12th standard from Queen Mary’s Girl School, Delhi. She graduated in Political Science honours from Hindu College, Delhi before joining the Delhi Law Faculty for couple of months before opting out for Post Graduation Diploma In Management from Amity Business School.

Ayesha was selected by HDFC Bank in a campus recruitment drive and she was posted at the Bank’s Connaught Place branch. No wonder, she loves Delhi and it feels like her second home.

Traditionally, Kashmiri females have always opted for medical profession. How come you opted to tread a different path by doing the Indian Banking Industry?
Yes, it was indeed a shock for my parents when they accidentally got to know that I had opted out of science wing in my school and gone into commerce. Since I was studying in a hostel after my 10th class results without opting for it I was automatically put into science section in 11th as I had scored 97% in science in my 10th  CBSE exams and secondly as my parents had already asked my principal to put me in science section but I always had a mind of my own and never wanted to be a book worm and keep studying all the time and that also text books. So after standing outside my principals office for 10 long days I was finally able to convince her that I will not do science and wanted commerce. So yes it was indeed a battle to convince my parents to let me go ahead with my choice of subject when my parents got to know that without their permission and knowledge I had opted out of the medical profession forever. Incidentally since my aunt (father sister) Dr Bilquees is a leading gynecologist in Kashmir, my father always had this dream that I will follow in her footsteps  and hence the desire for me to take up medical profession was manifold and the heart break consequently was also manifold.

The profession you are in, gives you an opportunity to interact with people from various cultural backgrounds. What has been your experience as a person working in the Banking industry of a Kashmiri origin?
I started my career in a branch in Connaught Place and hence my exposure to all types of people and customers was varied and quiet mixed. I always got a lot of attention and respect from almost all the people I interacted with and being a Kashmiri working in Delhi. My work and dedication was appreciated not only by my colleagues and seniors but also by my customers.

So overall I have always loved Delhi and consider it at just like my hometown.

What have been the high points in your career?
My high points have been many as every promotion that I have got was a high for me. But yes my favorite was when on 2nd March 2013, I was announced as the first lady cluster head in not only in HDFC Bank, but in whole of J&K as a State. For this I always thank my boss who always been my mentor and guide Mr. Zubair Iqbal. He has always pushed me to achieve the the best of my potential and has always been a supporter and a very good critic also.

What was the reaction of your family & friends when you opted for this career?
Well I was not married when I opted for this career, so the reaction of my parents was very warm as they wanted me to be in the financial industry as they considered it to be pretty respectful for a lady. I on the other hand was really enthusiastic about either joining media or the fashion industry. The day I got selected in HDFC bank, through a campus recruitment, the same day Star Network was also interviewing in our campus and actually I was running after that job  but before the last round of interview with Star could happen , HDFC Bank announced its list and my name was there and in our college, once you were selected for a company, you could not sit for any more interviews.

So my fate was sealed and my family was ecstatic and I was just like OH chaloo dekhtee hain, let me give it a try and if I get bored I will change and now its been ten years and I am still here.